Mr. Adeeb Jawad Joudeh Al Husseini (Al Ghodayya) is the son of Mr Jawad Adeeb Joudeh Al Husseini. Mr Joudeh was born in 1964 and married with four children and speaks Arabic, English, and Hebrew. Mr. Joudeh lives in Jerusalem and he performs his duties as the custodian of the keys of the Holy Sepulchre and the holder of the stamp of the Holy Tomb on a daily basis.

Mr. Jawad Adeeb Joudeh Al Husseini (1923 - 1992) was born and raised in The old city of Jerusalem. He finished his studies in Zion Mountain School. He got the custody of the Holy Sepulchre keys at a young age (16 year old) after his father's death. Mr. Jawad was one oof the first founders of the Jordanian Broadcast Station in Amman where he held a Techical Engineer position. Mr. Jawad heal another honorary position among them is the holder of the stamp for the Holy Grave, custodian of Waqf Khaski Sultan, and many other positions. Mr Jawad passed away on 11 December, 1992 and buried in Jerusalem. 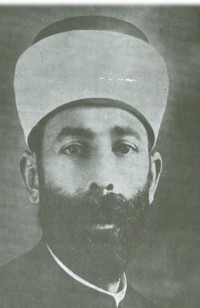 Sheikh Adeeb AbdulQader Joudeh Al Husseini (1885-1945) was born and raised in Jerusalem to a family which it's members occupied high ranks in Al Aqsa mosque and the state of Palestine at that time. Sheikh Adeeb was the chief of Mouazensbin Al Aqsa Mosque, The President of the Islamic Museum in Palestine, custodian of many endowment among them is Khaski Sultan endowment in the old city of Jerusalem, Prophet Mousa endowment, and many more. Sheikh Adeeb passed away in 1945 and is buried in Jerusalem.

Made with SimDif
Sari Joudeh AlHusseini