The Joudeh's across the centuries

JERUSALEM, The Church of the Holy Sepulchre (Resurrection) was established in 333 by the Roman emperor Constantine, after his mother, Queen Helena, marked the place of Golgotha during her visit in 326AD. The church is considered the oldest churches in Christianity, and most Christians believe that it is the location of the Rock where Jesus was crucified on in the Holy Land.

Mujeer Elddin Al Hanbali (A judge and a great Arabic historian) described the Church as the 3rd Gem in Jerusalem after Al Aqsa Mosque and Dome of the Rock.

The Church was given that name in relation to the resurrection of Christ from death on the 3rd day according to the Christian doctrine. Every year millions of Christian pilgrims from around the world to visit the Holy Church.

Salah Elddin Al Ayoubi, a generous and liberal ruler, did not wish to bar the Holy Land to Christian pilgrims despite the years of struggle with the Crusaders, and in a display of tolerance offered a safe and free passage through the Holy Land to all genuine pilgrims.

Although Salah Elddin was tolerant he was not a fool. He realized that soldiers might conceal themselves among the thousands of pilgrims who poured into the Holy Land each Easter and took certain steps to insure his safety. First, he proclaimed a feast day to be celebrated just about Easter time. The Muslim faithful who flocked to the Holy City for the new feast provided a nice numerical balance to the Christians. Second, Salah Elddin ordered the key to the church to be retained by the Hashemite Noble Family "Joudeh AlHusseini, Al Ghodayya".

According to the Jerusalemite Historian Dr. Aref Al Aref in his book "The Detailed History of Jerusalem" the Joudeh AlHusseini Family was entrusted with the Keys to the Holy Church since the 12th Century under Salah Elddin in 1187. "Our family has been carrying the keys of the church since the era of Salah Elddin. We have been doing this in accordance with hundreds of Faramans (Royal Decrees) issued by the successive sultans who ruled Jerusalem, "affirmed Adeeb Jawad Joudeh AlHusseini, currently the DeputyGovernor of  the Sultan (Qa’em Maqam) and the current Custodian of the Keys of the Holy Church.

The Custody of the keys are still in the hands of the Hashemite Joudeh AlHusseini Family, Al Ghodayya, until these days inherited from father to son and nobody is allowed this honored job other than this Hashemite Noble family. The Joudeh’s are still dwelling in the Holy Land of Jerusalem. All Christians Denominations are in agreement to keep the honored job with this Muslim family.

Mr. Adeeb Jawad Joudeh AlHusseini, the current Custodian of the Keys of the Holy Church says that the Great Leader Salahuddin Alyoubi and in order to protect the church from any ruler who comes after him and thinks of ruining the church so he decided to handle its keys to an influential family who can protect the church from any harm in the future and can take a decision in protecting the church so he decided to delegate this honorable job to the Joudeh AlHusseini family. Mr.Joudeh adds that the Israeli authorities tried opening other gates to the church in an attempt to cancel our honorable job, but the Muslim-Christian unity repels these attempts. Mr. Joudeh adds, we are proud to be the custodians of the keys and we are keen on guarding and maintaining the Holy Church. The history of the Christians and Muslims in Jerusalem is filled with many examples of brotherhood and respect for all religions".

As the most current custodian of the key (the long, curiously-shaped key that the door keepers and the priests use at dawn to open the gate of the Church) Mr. Joudeh added that each of the three major sects receives the key for one day during the Holy Week (Easter). On Holy Thursday the key is held by the head of the Franciscan Monastery. On Good Friday the key is held by the Chief Dragoman of the Greek Orthodox Monastery. On Holy Fire Saturday it is held by the Armenian Orthodox Church when the Custodian of the keys has to stamp the Holy grave before the Holy Fire comes out announcing the beginning of Easter Celebrations. Other sects may use the church, of course, but only these three may hold the key. 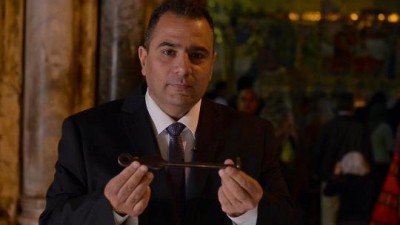 Made with SimDif
Sari Joudeh AlHusseini